The parents of Blessed Alexandrina Maria da Costa were Maria Ana da Costa and António Xavier. They were neighbours, but unmarried. António Xavier was an emigrant in Brazil. Once he came back to Balasar and Deolinda was conceived; later he went again to Brazil. In a second coming, was conceived Alexandrina.
But even before her birth the unworthy father António married a girl from Póvoa de Varzim.
Faced with this situation, the young mother saw herself as a widow and started caring only for the maintenance and education of her daughters.
She became an active, exemplary and prayerful woman.


She suffered much, but Jesus promised Alexandrina he would take her mother to Heaven without her having to pass through Purgatory. 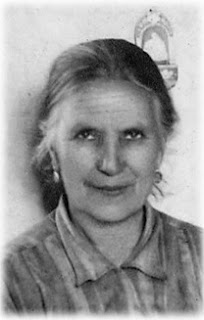 The arrow indicates the house where Alexandrina was born at Gresufes.
Posted by José Ferreira at 03:04