On 9 October 1950, Fr Leopoldino reports the arrival of the sculptor José Ferreira Thedim in Balasar, from S. Mamede do Coronado. At first people might think he would be one of the many pilgrims, who came to visit Alexandrina, or he might have come and gather information for a new image of Our Lady of the Conception whose destiny was the parish church. Read about what the same journalist reported on the Immaculate Conception Day in 1952.

On the Immaculate Conception feast, in which a distinguished prior of the parish of S. Sebastião, Guimarães (the priest José de Jesus Ribeiro),  preached, a new statue of Our Lady was blessed , a generous and devoted gift from our emigrants in the State of Rio de Janeiro, Brazil. The image is a lovely masterpiece, both in the art of sculpture and in painting, revealing the author’s skills, which honors his workshop. All the people praise him a lot”. 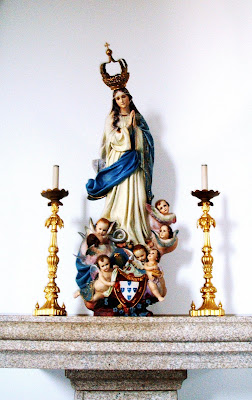 The Mother of God tramples the serpent under foot, as it is usual in such representations, and under her feet there lies a globe. The five shields intend to the fact that Our Lady of Conception is the patron saint of Portugal.
José Ferreira Thedim (1892-1971) was born in S. Mamede do Coronado, where he developed his art.
His father was a sculptor as well his siblings. The statues by Thedim excelled exuberance: he was the only one shaping, designing and making all this by himself. There was a special environment in the workshop: a silence that resembled a church.
In 1917 he was asked to carve the image of Our Lady of Fatima. Thedim was then introduced to Sister Lucia to collect data for his work, but he also gathered ideas from a Spanish book.
His work finished, with one meter and three centimeters from the pedestal to the skull, the image was sent to Fatima and blessed by the local priest in May 13, 1920 and placed in the Chapel of the Apparitions in June 13.
From then on Thedim’s work got known internationally, to such an extent that in 1931 he was awarded the title of Knight Commander by Pope Pius XI.
In 1947, the sculptor created the image of the Pilgrim Virgin, having met Sister Lucia once again.
His work is spread all over galleries, churches, monasteries and convents around the world.

His first images were made of cedar wood from Brazil, S. Paulo, Parana and Santa Catarina States; it was a woody and colored material, with a distinctive smell and good for carving.
See also here.
Posted by José Ferreira at 03:31