After the Christmas Fayre, the second half of the event started around 7.30pm with a selection of excerpts from various Mary’s Dowry Production films, followed by the first public showing of the Blessed Alexandrina DVD. 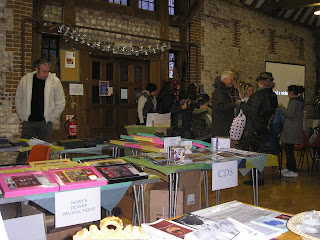 Agnes Lee, who played Blessed Alexandrina in the film was among those in the audience.  The Blessed Alexandrina DVD was very well received.  One woman religious who was present described it as ‘moving and important’ and bought a copy of the DVD to show others.
Another couple came along, and it transpires they had been at Alexandrina’s beatification in Rome in 2004.  They said:- “We had not gone to Rome for the Beatification.  In fact we did not know until the day before that there would be a Beatification on the Sunday - it was just an added bonus to our visit.  There were six Beatifications on the day and I am sorry to say we were not familiar with any of the individuals.  I can remember on our return home reading in the Catholic papers the following week about the beatifications in Rome and this was the first time we learnt anything about the people concerned.  We always felt very privileged to have attended a beatification and although we kept the book as a memento we had forgotten the names of the individuals involved.  It wasn't until the end of the film last night, when the narration confirmed the date of the beatification, that we made the connection that we must have been present at Alexandrina's Beatification”.
It seems Blessed Alexandrina didn’t want them to forget her! 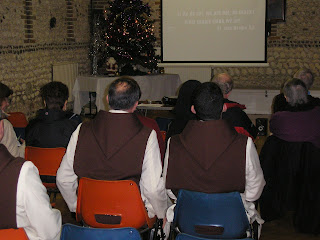 Pictures:
The Mary’s Dowry Productions stall
The audience watching the showing of the DVD’s
Posted by José Ferreira at 06:02